Al and Suiling Weed moved to Lovingston in 1973 and began planting the vineyard in 1974. Neither had any experience with wine-making, and in fact family lore tells it that Al learned from a Sears “Make Your Own Wine” kit. Thankfully there wasn’t much to compare the first results to in Virginia, as the winery business was brand-new.

Before moving to Nelson County, Al worked in international finance in Washington DC. He is also a Vietnam veteran, spending time as a Special Forces medic before finishing his degrees at Yale and Princeton. He was drawn to farming from his boyhood attending Church Farm School in rural Pennsylvania. Al is a retired Command Sergeant Major in US Army Special Forces. He is passionate about the environment, current events, and opera. He loves chatting with visitors about their passions and life experiences.

Suiling hales from Panama and grew up surrounded by travelers in the Canal Zone. She never expected to live on a rural farm, but has planted deep roots in Nelson County, figuratively and literally. Suiling is a retired UVA Health System Head ENT OR Nurse. She enjoys good food, traveling and visiting New York City. Suiling has never learned to drive the tractor without incident.

I, Al Weed, my wife Emily (also known by her Chinese name, Suiling), our son Trés and infant daughter Julie, came to Nelson County in the summer of 1973 to plant a vineyard, build a winery and establish our family’s roots.

That fall, global oil prices went through the roof (the first “oil shock”) and keeping warm in our un-renovated farmhouse, with its ancient and inefficient oil furnace, was a real challenge.

We had purchased the home-place of a larger, abandoned farm that had at least thirty acres suited for vineyards. In the Spring of 1974 the first six of twelve acres were planted. Learning how to grow grapes (and control weeds) has been a multiple decades adventure but, when the weather cooperates, the vines produce the fruit to make first class wines. 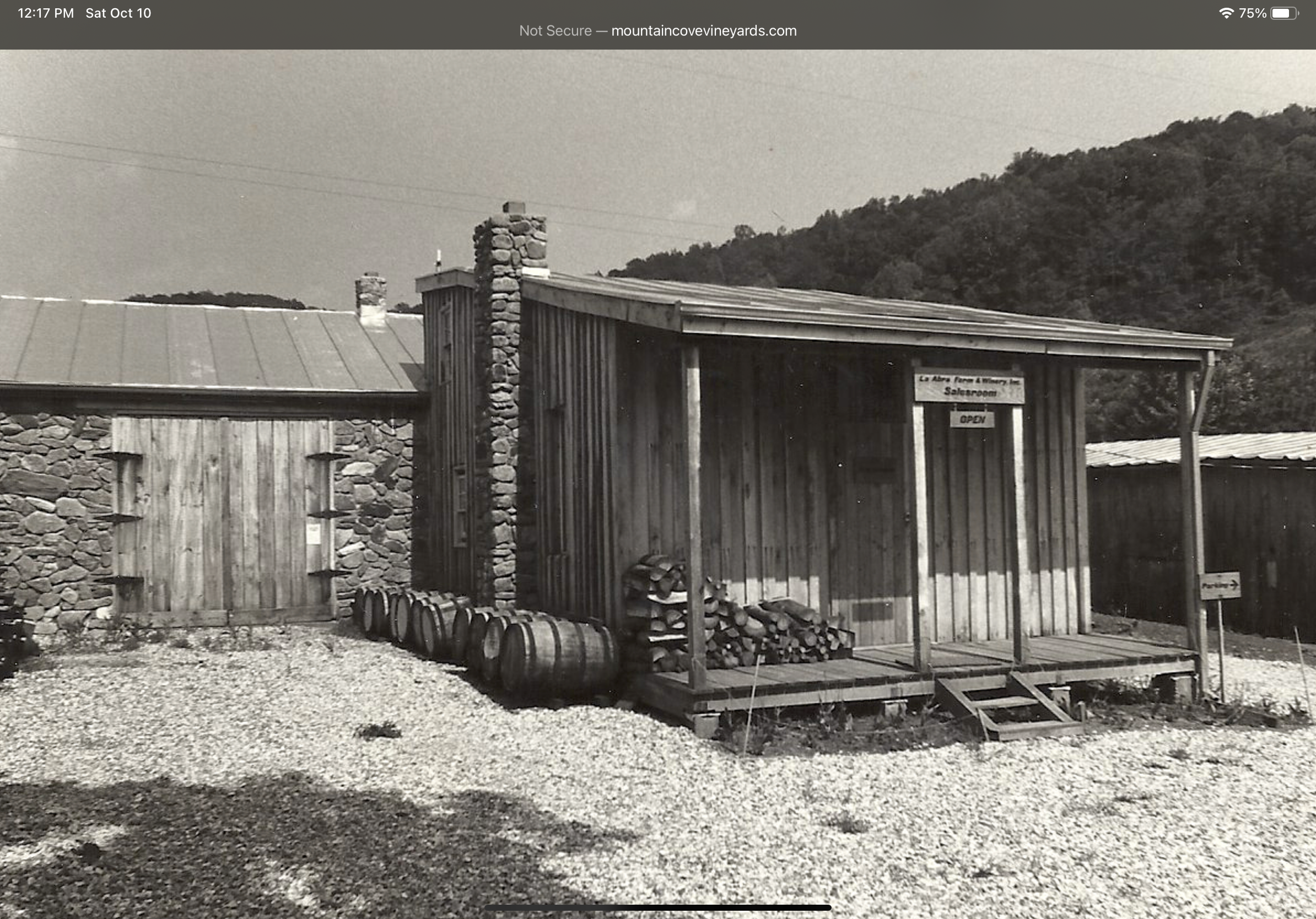 Originally called “La Abra Farm and Winery”, we soon adopted the Mountain Cove name as it was easier to pronounce and evoked the small valleys found in Central Virginia.

To begin the winery construction we had to tear down some of the older buildings. Our design was simple. We hired local artisans to build the stone structure from rocks found in the creek running through the vineyard, and local tinsmiths for the roofs. The carpentry, plumbing and electricity were done by Ladd Davies – an old Army buddy – and me.

The wooden salesroom/office used a then popular technique known as “green wood construction” with the red oak coming from a local saw mill and the yellow pine beams from my neighbor’s hillsides. 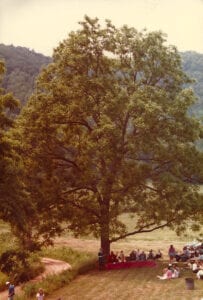 Our first outdoor events took place under a magnificent walnut tree that was destroyed by lightening in the early 1980’s.

Over the years Mountain Cove has hosted a wide variety of events, including the only stage performances of Earl Hamner Jr’s “The Conflict, and today is home to special parties, business events and weddings. 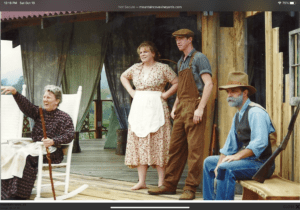 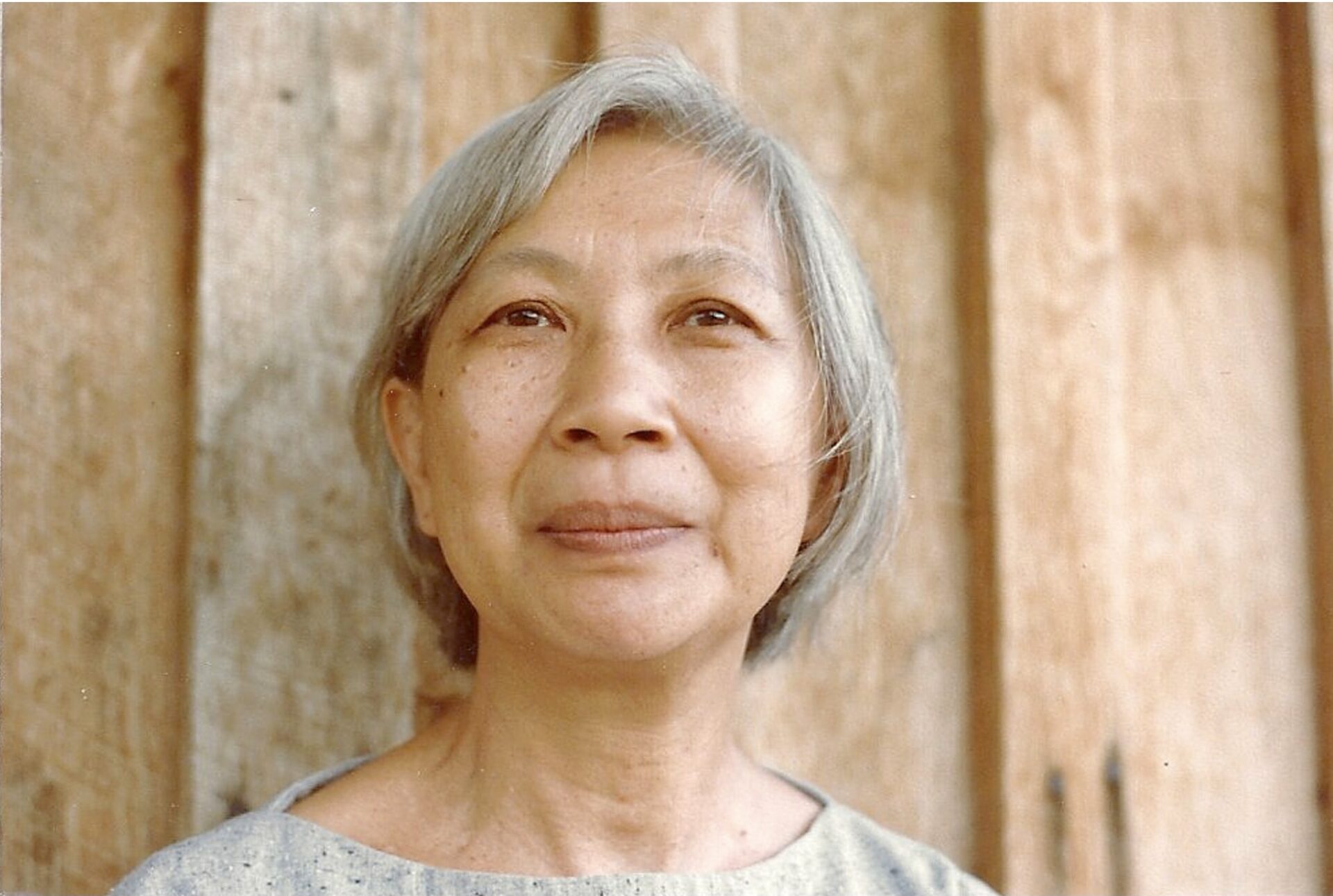 Although Mountain Cove has remained a family run business, (with paid help today only for picking and seasonal vineyard activities) we could not have succeeded without the help of Suiling’s late mother Joyce.

Joyce, or more affectionally PoPo, was a world traveler often jumping on cargo ships from the Panama Canal to see the world. She often traveled with Suiling, Julie and Tres, exploring such destinations as London and Austrailia. PoPo loved meeting new people and chatting about their travels.

We also could not have succeeded without the help of a legion of hard working (and drinking) friends!

All of Virginia’s small farm wineries thrive with the help of loyal customers and friends, each playing an important role in the growth of our industry.

Winemaking at Mountain Cove started in 1976, our first batch of wine being a dry apple wine made from local fruit. The winery design included shelves for aging wine (such aging now done in the cases themselves) and locally manufactured square stainless steel tanks (which we still use as our red wine fermenters). 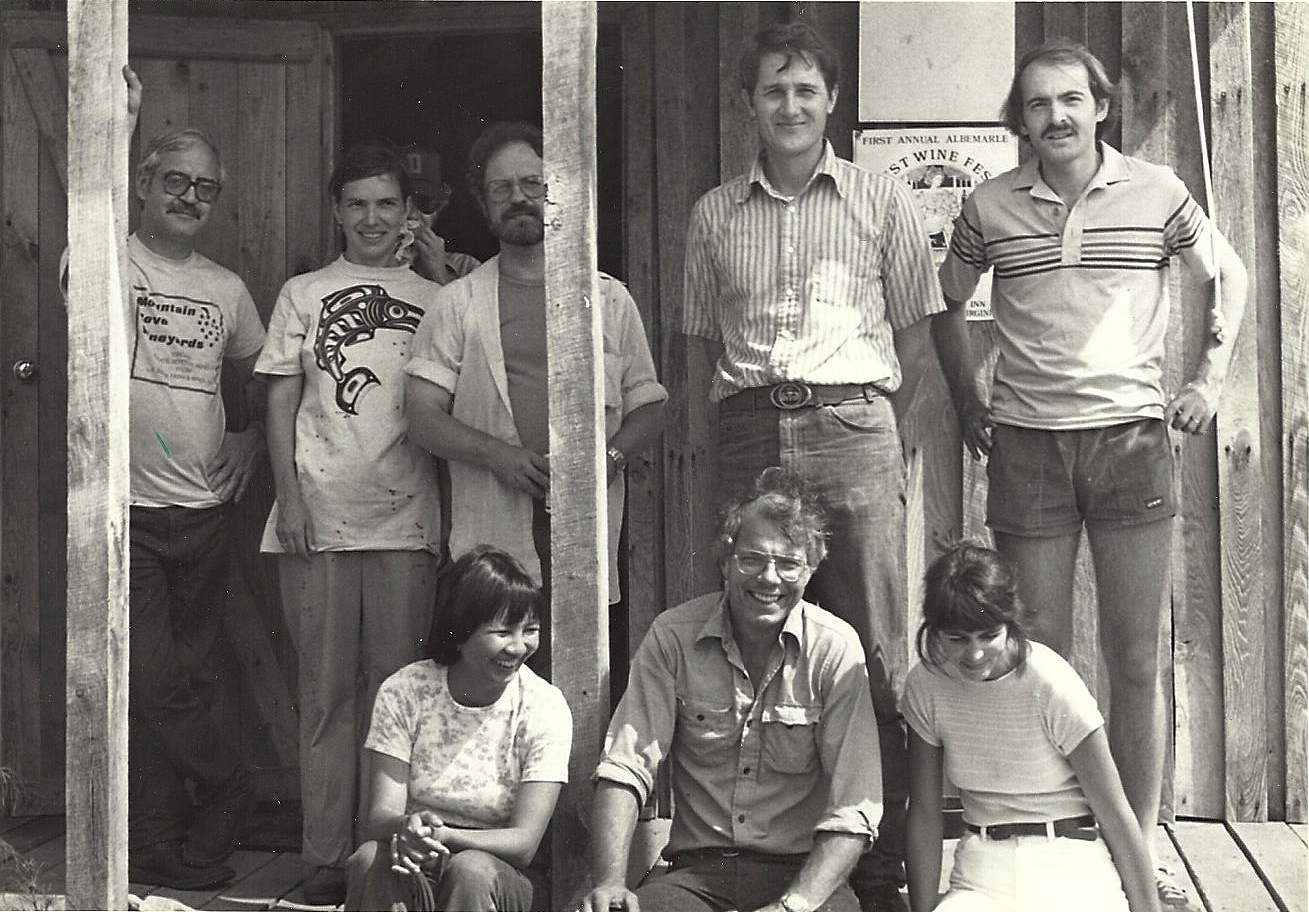 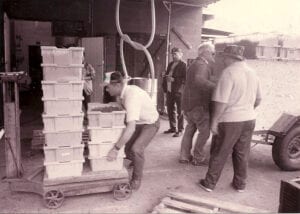 The grapes were picked into lugs – plastic containers that hold about thirty pounds apiece – and brought to the winery for crushing (am I really trying to lift four lugs?!).

Today we dump the grapes into large bins in the field but still use the original red-painted stemmer crusher. 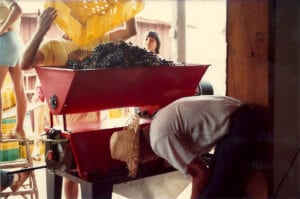 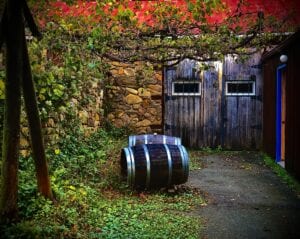 We use a mix of American oak barrels to age the reds and stainless tanks for the whites and our fruit wines.

We have always done our own bottling with in-house equipment and today use a system that allows for a one-man operation producing fifteen cases per hour.

We at Mountain Cove were involved in every significant development in the first twenty-five years of Virginia’s modern wine era.

I was the second President of the Virginia Wineries Association and was a key author of the first Farm Winery Bill – along with colleagues from Meredyth, Piedmont, Shenandoah, Oakencroft, Barboursville and Burnley Wineries.

When the US Supreme Court said that Virginia’s exemption for farm wineries from the $.30 per bottle wine tax was counter to the Commerce Clause, I wrote the legislation establishing the Virginia Wine Board, which, among other effects, ensured that the taxes we as Virginia farms paid went to support the growth of our industry.

This funding has been the basis for most subsequent state support for Virginia's farm wineries.

Wine has always been a regulated product so keeping close to politicians has been important. It is fair to say that the robust nature of today’s industry, when compared to our neighboring states, is largely due to the support we have received from State legislators and leaders over the years.

Over the years my involvement with the political aspects of wine production has led me to run for public office – for the nomination to run for State Senate, and twice as the Democratic candidate for Congress in Virginia’s 5th District.

For almost eight years I was co-Executive Director of Public Policy Virginia, a non-profit working to bring to Virginia’s rural regions the benefits of biomass energy. 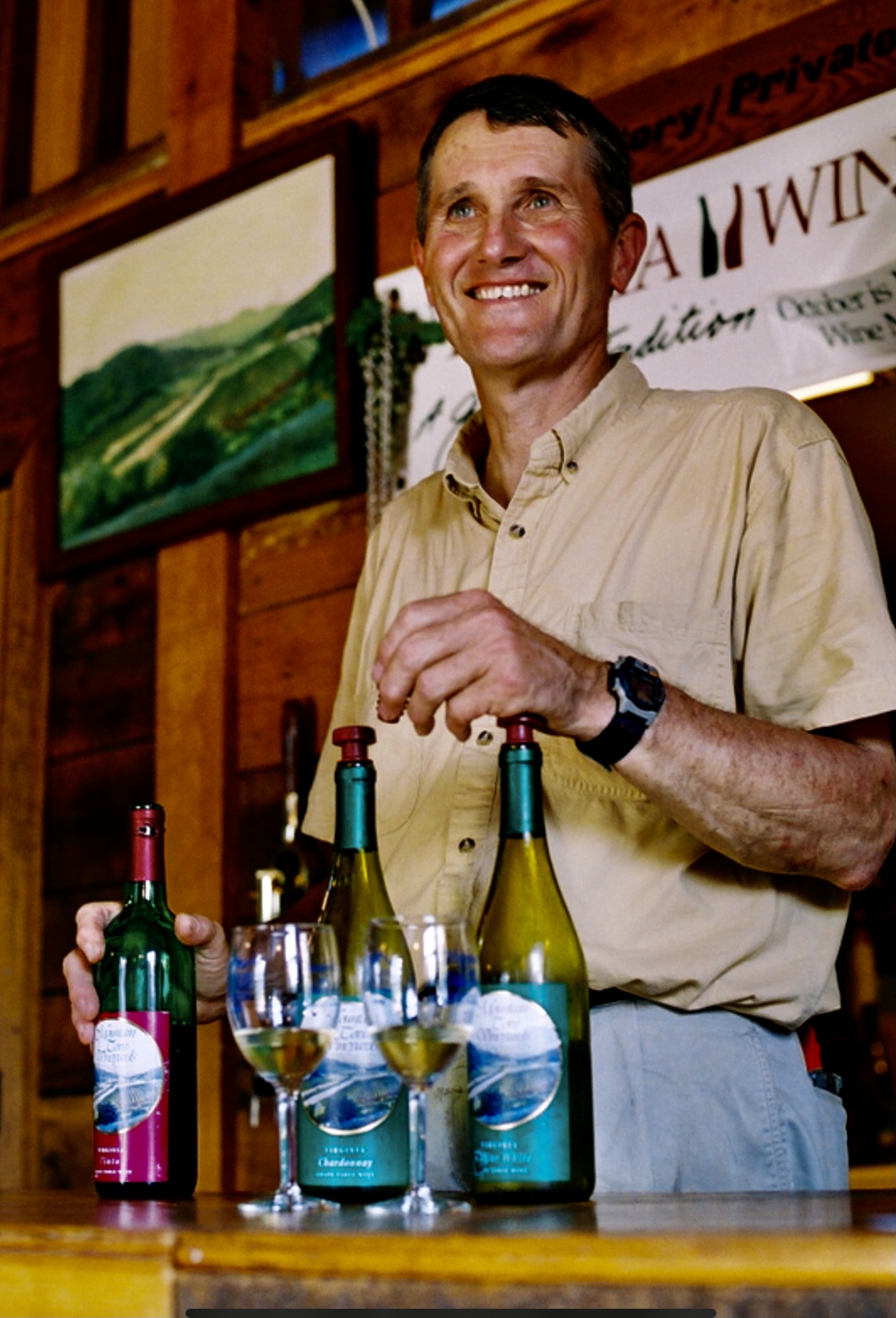